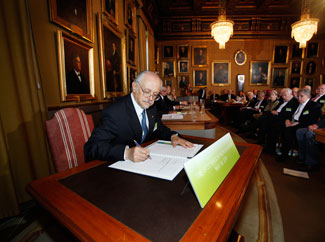 He was a pioneer and one of the main scientists in the world dedicated to atmospheric chemistry. He was co-author with Frank Sherwood Rowland, of the 1974 original article predicting the depletion of the ozone layer as a direct consequence of the emissions of certain industrial gases, chlorofluorocarbons (CFCs), earning them the 1995 Nobel Prize in Chemistry. Likewise, his research and publications on the subject lead to the United Nations Montreal Protocol, the first international treaty that has faced with effectiveness an environmental problem of global scale and anthropogenic origin.

Professor Molina and his research team published a series of articles between 1976 and 1986 that identified the chemical properties of compounds that play an essential role in the breakdown of the stratospheric ozone layer. Subsequently they demonstrated in a laboratory the existence of a new class of chemical reactions that occur in the surface of ice particles including those that are present in the atmosphere. They also proposed and demonstrated in the lab a new sequence of catalystic reactions that explain a major part of the destruction of the ozone in the polar stratosphere.

Molina was a member of the National Academy of Sciences and the Institute of Medicine in the United States and for eight years he was one of the 21 scientists that served on President Barack Obama´s Committee of Advisors on Science and Technology (PCAST); he also previously served on President Bill Clinton´s PCAST.

Likewise, he was a distinguished member of the Vatican´s Pontifical Academy of Sciences, the National College of Mexico, Mexican Academy of Science and the Mexican Academy of Engineering, among others. For his contribution to science he received numerous awards including over 40 honorary degrees, the Tyler Prize for Environmental Achievement in 1983, the UNEP-Sasakawa Environment Prize in 1995, the 1995 Nobel Prize in Chemistry, the Presidential Medal of Freedom and the United Nations Champion of the Earth Award. 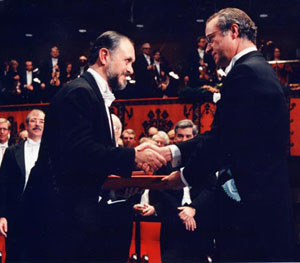 He was a professor at the University of California, San Diego (UCSD), with a joint appointment in the Department of Chemistry and Biochemistry and the Scripps Institution of Oceanography, one of the leading research institutions on phenomenon’s associated with climate change.

In Mexico, he presided since 2005 a Center that carries his name, which conducts research and promotion of public policies. The Center focuses on strategic studies on energy and environment, particularly in the field of climate change and air quality.

Prof. Molina was married to Guadalupe Álvarez and his main residence was Mexico City.

Dr. Molina died on October 7th, 2020. Dr. Mario Molina started off as an exemplary Mexican who dedicated his life to researching and working to protect our environment. He will always be remembered with pride and gratitude.