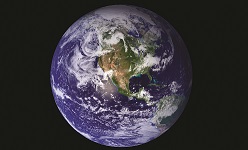 What is Climate Change?

WHAT IS CLIMAGE CHANGE?

The average weather during a period of several years for a determined place is what we know as climate, and the principal variables that describe it include temperature, humidity, and rain, coverage of clouds and the trajectories and intensity of the wind. The reconstruction of past climate indicates that, even if it has had transformations, these took generally thousands or tens of thousands of years to occur, and were caused by factors such as variations in the geometric form of the orbit and the inclination of the terrestrial axis, or volcanic activity. On the other hand, the exceptional stability of climate during the past ten thousand years allowed the establishment and development of civilization. By contrast, critical variables of the global climate system, such as the average temperature of the surface of the planet (earth and oceans) as well as the distribution of precipitation have been modified increasingly in recent years, to a degree in which significant changes have been observed in decade periods: this phenomenon is known as climate change.

How does the earth’s climate work?

The Sun is the main source of energy for our planet. It comes in the form of visible light, and approximately a third is reflected again into space by clouds and terrestrial surfaces such as snow and deserts. The rest of the energy (two-thirds) is absorbed by the earth and oceans. However, the planet does not store such energy since millions of years ago; the planet emits into space in the form of infrared rays (thermic radiation) the same quantity of energy than that which it absorbs. The laws of physics tell us that the average temperature of the surface of the planet should be -18°C if Earth had no atmosphere; this is, if all infrared radiation emitted by the surface would go directly into space. Fortunately, it is not so and the average temperature is +15°C. 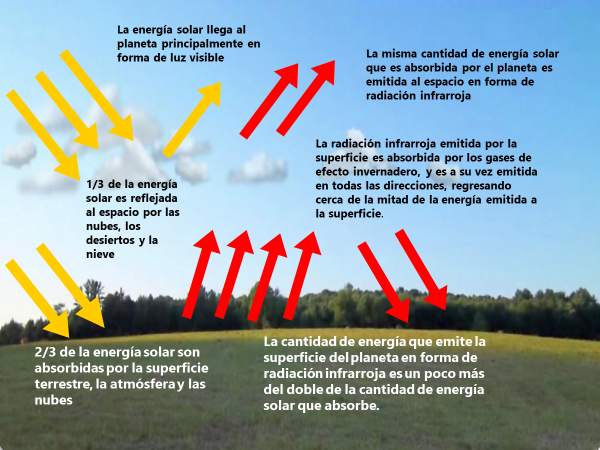 What makes possible for Earth to have this temperature?

Because the quantity of energy that the planet loses to space is equal to the quantity absorbed, the surface of the planet emits double the energy that the Sun receives, as only half of the energy is liberated to space. These gases that absorb infrared radiation are called “greenhouse gases (GHG)” as they act in a similar way to the glasses of a greenhouse (Figure 1).

This is how the atmosphere that surrounds the Earth plays a very important role: on one hand, it protects the planet from high energy radiation coming from the Sun (Ultraviolet “UV” radiation). On the other hand, it results in comfortable temperatures that prevail and that have permitted the evolution of life. If the atmosphere didn’t exist, the Earth would be frozen and life would not be as we know it.

The atmosphere is made up primarily of nitrogen (78%) and oxygen (21%). The rest is argon, water vapor and other gases called trace gases, as they are found in very low quantities and are measured by parts per million (ppm). The main GHG are water vapor and carbon dioxide (CO2), which are part of the natural composition of the atmosphere and fundamental cycles intervene for life, such as the water cycle and the carbon cycle. These gases are produces when human beings and other living organisms breathe, which causes the oxygen of the atmosphere to react with nutrients (carbohydrates C6H12O6). Also, CO2 is used by plants to make photosynthesis, which regenerates atmospheric oxygen. CO2 is also released when fossil fuels or biomass are burned. There are other types of greenhouse gases such as methane (CH4), which are produced by the bacterial decomposition of organic material in the absence of oxygen, such as it occurs in the digestive activity of rumiant animals. Nitrogen oxide (N2O) is also produced naturally as a result of the decomposition of bacterial organic matter.

During thousands of years, the composition of these gases has been stable in the atmosphere. However, since the Industrial Revolution, humankind started to use fossil fuels (carbon, petroleum, natural gas) and the concentrations of carbon dioxide in the atmosphere have increased to levels that had not existed in several millions of years, such as can be showed in figure 2. 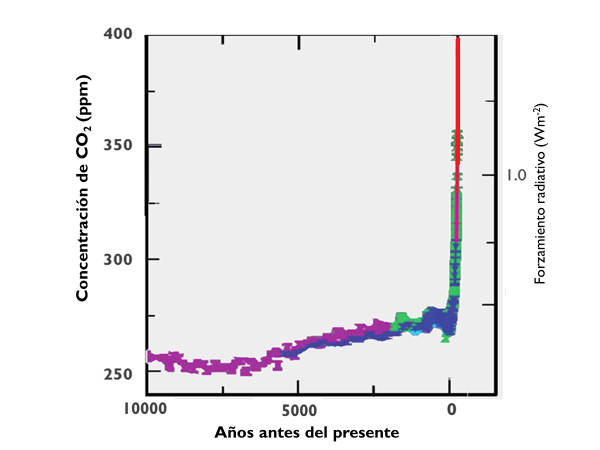 In the same way, atmospheric concentrations of methane have more than doubled in recent years, and nitrogen oxides have also increased considerably. In other words, human activity has significantly modified the chemical composition of the atmosphere from the perspective of trace gases.

What evidence is there of climate change?

Warming of the climate system is unequivocal, as evidenced by the rise in the observed average global temperatures of the air and the layer above the ocean, melting of glaciers and rise of sea-level global average. A close relation exists between the acceleration of the increase in carbon dioxide emissions, its concentration in the atmosphere (figure 2), and the increase in the average surface temperature of the planet, which has been around 1 °C in the past 50 years (figure 3). It is important to take into account that this average comes due to major changes in different areas of the planet. There is a 95% consensus among experts that the  change observed now in climate is due principally to human activities. 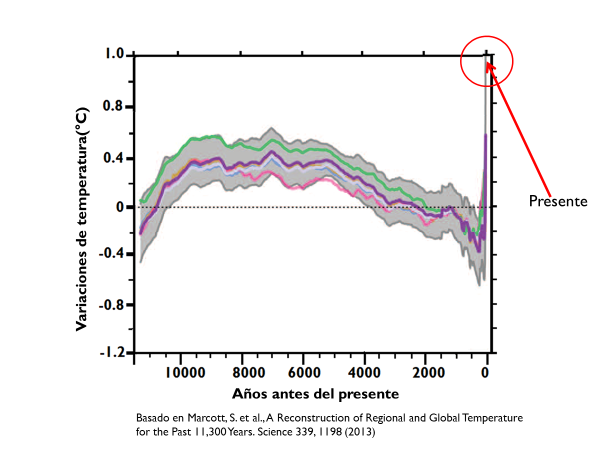 Figure 3. Variations in average temperature of the surface of the planet in the last 11 thousand years.  Source: Basado en Marcott, S. et al., A Reconstruction of Regional and Global Temperature for the Past 11,300 Years. Science 339, 1198 (2013).

What are the consequences of these changes?

Science indicates to us that, as a result of some degrees of warming, the quantity of water vapor that can exist in the air increases. For example, an increase of 3°C, depending on the relative humidity can increase the quantity of water vapor up until 25%. This vapor rises towards the clouds and later condenses in the form of rain, for which the quantity of rain has increased considerably in humid areas, causing frequent floods. In the same way, the intensity, duration and geographical extension of droughts have also increased.

In some cold areas, principally in the northern hemisphere, temperature changes have been of up to +3°C, which causes the glaciers and mases of ice to thaw. Also, in some parts of the oceans, increases in temperature have been detected, up to +3 or +4° C, which has increased the probability of hurricanes to form with stronger intensity. These types of events are known as “extreme weather events”, as usually they occur only once every twenty, thirty or 100 years. Other extreme events include heatwaves, floods and droughts of great intensity.

Climate change has triggered an increase in the frequency and intensity of extreme weather events, which, in addition to the rise of sea-level, already has adverse effects over natural systems as well as human settlements, effects that will exacerbate in the future, unless GHG emission are significantly reduced in this and the following decade.

Projections for the end of the Century

Even though detailed projections over the increase of temperature by the end of the century, as well as the effects they would have, present uncertainties, with the current information it is possible to establish that an enormous risk exists for society and its activities. If GHG emissions keep growing at the same rate or more, warming of temperatures will increase and the climate system will experience a number of changes during the XXI century, including sea-level rise, changes that will be maintained for centuries due to the magnitude of the scales of time associated with climate processes. The average temperature of terrestrial surface would increase to 30C or 4 0C towards the end of the century. However, what is worst is that according to climate models accepted by the international community of climate experts, there is a probability of one in five that temperatures would rise to 50C or 6 0C, which would have disastrous consequences for humanity: inhabitable areas would emerge, caused by heatwaves, intense droughts, and as a consequence great migrations. There would also be a rise in considerable damage caused by extreme weather events, such as storms and intense hurricanes, the sea-level would rise to the degree of flooding a great number of communities settled in coastal zones, etc. Also, there could be dramatic and irreversible disruptions such as the extinction of the Amazonian forest, melting of the Arctic, which would in turn create terrestrial weather very different from the one we know today.

Is there a solution?

As has been previously mentioned, in order to fight climate change it is necessary to stabilize the concentration of GHG in the atmosphere to a level that risk of catastrophes be diminished. The encouraging news is that yes, there are solutions in order to achieve this objective, which demands for actions in all levels. One of the most important is that governments of all countries, principally the ones that emit the most, should come together to regulate GHG emissions. This can be achieved putting a price on emissions, and also through the development and employment of sources of alternative energies such as solar, and wind because they are affordable, and nuclear energy of last generation. It is also important to make more efficient use of energy, which is a feasible measure to implement, almost immediately, as well as promoting reforestation actions and avoiding deforestation. It is also important to carry out adaptation actions oriented to reduce the vulnerability of people, infrastructure and ecosystems against the adverse effects of climate change, especially in vulnerable areas where extreme weather events occur.

Climate change, as well as the depletion of the ozone layer, are proof of the damage done by human activities to planet Earth. Solutions require compromise of all sectors of society. Mitigation strategies as well as measures for adaptation need collaboration at a global level from the scientific community, economists, engineers, entrepreneurs, decision-makers and civil society.

Fortunately, we know how to solve the problem to limit the increase in temperature, and thus avoid catastrophes with great impact. With the signing of the Paris Agreement, organized by the United Nations in December 2015, more than 20 years of work concluded in a successful global effort of negotiations to fight climate change. But there is still much more work to be done in order to consolidate and convert it to concrete actions, and more so that these can be reinforced and accelerated so the needed speed to diminish the risk that society must confront.

The Paris Agreement establishes mechanisms in order to increase the level of ambition in the immediate future, the periodical review of goals and individual efforts as well as collective in order to achieve them. It is possible for these types of international agreements to work, as was demonstrated with the Montreal Protocol, where practically all nations committed to reducing and phasing-out production, consumption and commercialization of substances which depleted the ozone later, and whose benefits after 30 years of its implementation can be observed.